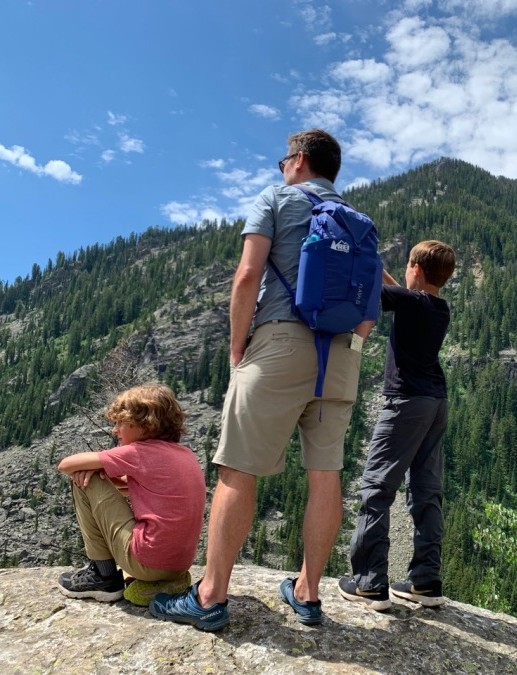 Ted Thomas Orr, from Upper Arlington, Ohio passed away peacefully on Friday, April 2, 2021 at the age of 45 with his wife and mother by his side. Ted’s physical company will be sadly missed but the personality that touched so many will live on for infinity.

Ted is survived by his loving wife of 18 years, Kimberly, and two sons Ashton and Miles.

He is also survived by his caring parents Richard and Laura Orr, his four big brothers Joseph (Christy), James (Angela), Robert (Gerda), Christopher (Lindsay), his wife’s parents Thomas and Catherine Ryan, and his sister-in-law Melissa (Andrew) Haines and many nieces and nephews. In addition to his immediate family, Ted leaves behind a large extended family and many, many friends.

Ted was devastated by the death of his nephew, Connor, and was also preceded in death by his faithful chocolate lab, Vail.

Ted loved lacrosse, the outdoors and time with friends + family. Ted was a beloved member of the Upper Arlington Lacrosse community. He played lacrosse at Hilliard Davidson High School where he graduated in 1995 and went on to be the Head Coach before moving his family to Upper Arlington. Ted treasured the lasting friendships he made during those years. Childhood friends accompanied Ted on multiple back country backpacking trips through national parks. They would fly, canoe and hitchhike to experience the most serene landscapes with the closest friends. We were lucky Ted never burnt down a house perfecting his diy ultra-light stove. Ted was determined for his family to love the outdoors as much as he did. They kayaked, went fishing and visited metro parks frequently. Ted loved working on his home. Craftsmanship, hard work and architectural knowledge came from years of being surrounded by his family’s successful construction businesses. Ted did much of the work on his two homes himself because he wanted the work done right. He was dedicated to doing work the right way and believed a well-designed and social home was a happy home. Ted turned acquaintances into meaningful friends everywhere he went. He really did have an infectious zest for life. Some of his closest friendships were made during his years participating in Society for Marketing Professional Services. Ted served on the SMPS Board from 2011-2016 and made a huge impact to the Education, Sponsorship and Programs Committees. Ted was proud to be a part of the Crawford Hoying Family, the place where his role was the EVP of Marketing. He treasured the company,  his team and the projects they brought to life. It was there where he spent every day amongst friends and never called it his job.

Ted, we’ve always loved you and miss you already. Without you, the world is less bright.

It is Ted’s wish that his service and internment be very small and private. A Celebration of Ted’s Life will be held outdoors for family + friends at The Exchange Plaza in Bridge Park, 6520 Riverside Drive, Dublin, Ohio 43017 on Saturday April 24, 2021 at 3pm.

There is no cure for glioblastoma, the type of cancer that Ted battled for the last year. In lieu of flowers, please consider donating to the American Brain Tumor Association so more can be learned about this devastating disease.

Plant a tree in memory of Ted by clicking here.
To send flowers to Ted's family, please visit our floral store.

A service summary is not available

Plant a tree in memory of Ted
An environmentally-friendly option

Plant a tree in memory of Ted

26 trees planted in memory of Ted

Randy Malloy and the CD929FM Staff

Charles, an avid lacrosse player at Davidson and I his mother will remember Ted as an enthusiastic young coach, a capable and kind man. Family was everything to Ted.
We send our sincerest sympathy.
Mary Mars & Charles Mars-Mahlau

May Ted's spirit fly high and see and feel the whisper of the breeze through the branches of these trees .

In Loving Memory of Ted.

A Memorial Tree was ordered in memory of Ted Orr by The Beekman Family.  Plant a Tree

Plant a tree in memory of Ted